We live in a very politically correct world so this story really comes as no surprise.

Everyone’s favorite human being (and voice of the beloved Dory) has cause a bit of a stir by posting the following meme on her twitter account: 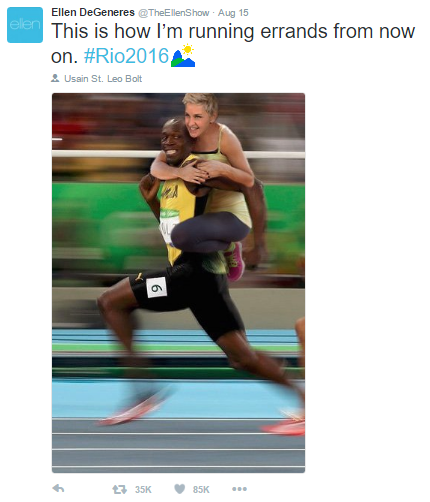 In case you aren’t following the Olympics at all (I’m not) the man in the picture is Usain Bolt who won the men’s 100 metres gold medal with a time of 9.81 seconds. With this win, Bolt became the first athlete to win the event three times at the Olympic Games.

As a follower of Ellen, I saw the tweet the other day on honestly thought nothing of it. I chuckled an moved on with my day.

Other people seemed to have a different interpretation of the meme:

Not everyone was on board with the idea of racism however and quickly came to the TV host’s defense:

While the post has seemed to cause friction in the online world, Usain Bolt retweeted the image, finding the humor in it.

Ellen did respond to the onslaught of criticism but as of this posting has not removed the original tweet.

Many have called for a boycott of the TV host saying that the tweet was in poor taste.

I see this as a great teachable moment to discuss with students as we head back to school. Was the tweet offensive? Is this a good time to reinforce the idea of ‘think before you post’?

What do you think?